Pink Panther is a rare minor character in the series. he usually appears as a cameo character and he barely knows Orange.

Orange = They don't hang out that much but he knows Orange in town sometimes and Pink panther can understand him, however Pink Panther doesn't know Orange's Annoyance.

Grapefruit = When he heard Grapefruit's jerkiness of orange giving up, he doesn't seem to like him so much and grows a sting dislike but they barley seen each other, other then Pink Panther. 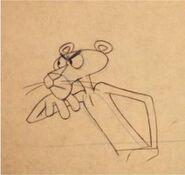 Pink panther hearing Grapefruit
Add a photo to this gallery
Retrieved from "https://annoyingorangefanon.fandom.com/wiki/Pink_Panther?oldid=16642"
Community content is available under CC-BY-SA unless otherwise noted.